Today, uploaded a set of updated packages of libreoffice-3.3.1 for the 64bit Slackware platform. The packages that I had originally made available were sub-optimal.

What happened? When I compiled libreoffice 3.3.1 earlier this week I used two separate (virtual) machines for that, one running 32bit Slackware and the other 64bit Slackware. Somehow I was not paying attention when I copied the results back into my repository and the correct 64bit packages were overwritten by a flawed attempt of a day earlier.

The packages (version “1alien“) that I originally had in the 64bit repository did not include many of the extensions that should have been bundled (the pdf-import, mysql-connector and report-builder modules for instance) and they did not have a working dictionary install routine either.

The updated 64bit packages (version “2alien“) are the good ones. They contain all the extensions, and several dictionaries in the language packs just like the 32bit packages already had. I advise you to upgrade to these versions of libreoffice-3.3.1 for Slackware64! Note that the 32bit packages were alright  from the beginning – they do not need an update.

PS: This is what my Extensions Manager shows now: 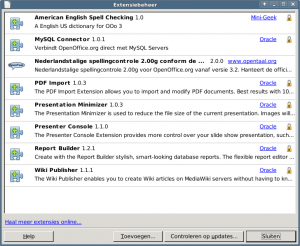