The Document Foundation released Libreoffice 5.1.4 on June 23, but I was kept busy with preparing my own packaging and scripting stuff for the release of Slackware 14.2. In addition, a new release of Plasma (5.7) is near, for which I promised a Live ISO to be available on July 5.
Still, I thought new packages were needed after someone pointed out that there is a CVE associated with the 5.1.4 release because it fixes a security bug:  CVE-2016-4324. Therefore I am pleased to announce the immediate availability of Slackware (14.2 and -current) packages for LibreOffice 5.1.4.
According to the announcement this LO release is “targeted at individual users and enterprise deployments. Users of previous LibreOffice releases should start planning the update to the new version“. 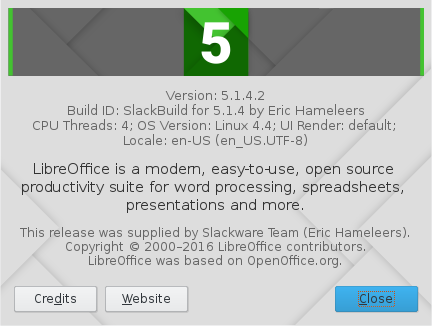 LibreOffice 5.1.4 is otherwise a minor update, focusing on bug fixes.

Packages can be obtained from these mirror sites and probably others too:

PS: for those who had not noticed: the LibreOffice browser plugin (NPAPI based) has been removed in 4.4.0: https://skyfromme.wordpress.com/2014/09/25/killing-the-npapi-plugin/