This article describes how you transfer the content of a “Slackware Live Edition” ISO file onto a USB stick (aka pendrive) thereby making that USB drive bootable, and persistent. The guide is meant for people who are not already running Slackware but still want to try Slackware on a Live USB medium. Note that the parent article “Slackware Live Edition” describes in detail how Slackware users can create such a Live USB drive.
Basically, this divides the article’s audience into:

I don’t think that LILO is used anywhere else than in Slackware. LILO does not support ISO images as boot selection, but it is still possible to make LILO boot Slackware Live. If you are not using Slackware but your OS is actually using LILO, let me know in the comments section and I will update this article with guidelines.

Why another guide if there’s a lot of documentation already?
It’s easy to use ‘dd’ or an equivalent Windows tool to copy the ISO file onto a USB stick, but then you end up with a read-only stick. The ISO9660 filesystem which is used for generating the ISO file, is read-only by nature and the ‘dd’ command copies everything, re-creating a read-only filesystem on the target.
People who want a Live USB stick with persistence, need to run the accompanying “iso2usb.sh” script which does some smart thngs to the USB stick to make it writable for the Live OS. However, using that script outside of Slackware seems to be an issue for some people.
Therefore this guide will show you how to:

Download and install  EasyBCD from Neosmart Technologies. This software is free for non-commercial use. EasyBCD will allow you to add a Linux OS partition to the Windows bootmenu (that is what I use it for on computers that need to keep the Windows bootloader instead of switching to LILO or GRUB). It is much more versatile than that: for our current purpose, it is also able to make the computer boot from an ISO image stored on the local harddisk.

Start EasyBCD (it will ask for permission to run as an administrator) and add a new boot menu entry for the Slackware Live ISO: 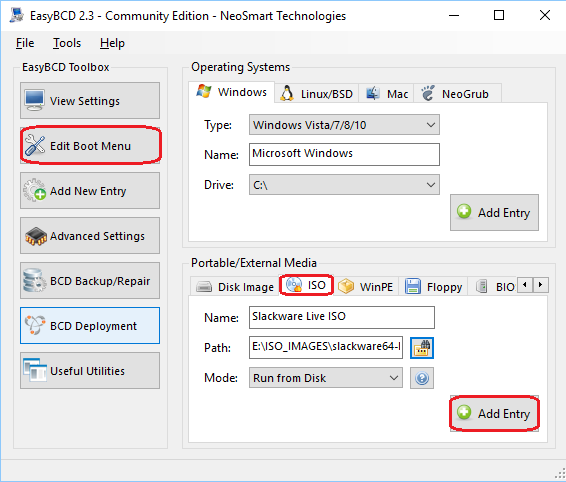 The “View Settings” will now show your new boot entry. You will notice that a new directory was created in the root of the Windows boot drvive (usually that is the C drive), called ‘NST’, which contains a single-purpose master boot record to boot the ISO image: 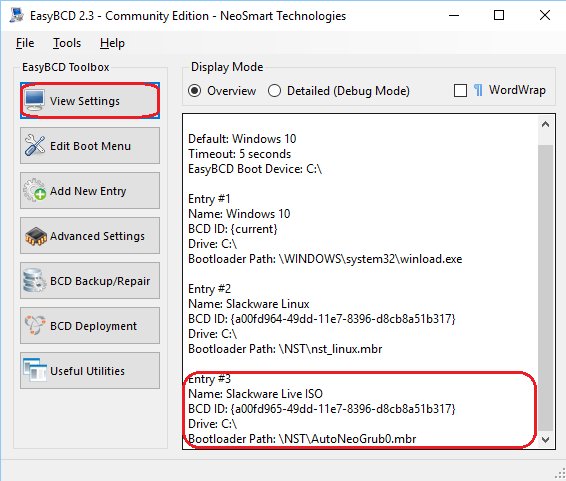 After rebooting your Windows computer you will see the new option “Slackware Live ISO” in the Windows Boot Manager screen. Select that option and watch your computer boot into Slackware Live. There are some remaining items to take care of before you can login:

I do not know about Grub 1.x (Grub Legacy)… probably no one uses this version anymore, but at least GRUB2 is able to loop-mount an ISO file and then access the kernel plus initrd inside the ISO image – and boot from these.

Pre-requisite is that you downloaded the Slackware Live ISO to your local harddisk – let’s assume that it is located in /home/alien/slackware64-live-current.iso .

After rebooting your Linux computer you will see “Slackware Live ISO” as a new selectable option in your GRUB boot menu. Select that, and watch your computer boot into Slackware Live Edition.

Step 2: transferring the content of the ISO to your USB stick

This is the easy part, as it has been documented extensively in earlier blog articles. Also see the official documentation on Slack Docs for this transferal process. I will repeat it here for completeness’ sake:

After completing Step 1 from this guide, you are now running Slackware Live Edition on your computer, booted straight from the ISO file which is located somewhere on the computer’s harddisk.

Let’s login and mount that harddisk partition’s filesystem into the Live OS:

Examples:
Note1 -the “#” at the beginning of these examples is an indication that you need to run the command as root. The “#” is not part of the command!
Note2 – the value for the output parameter is the device name of the stick and not one of its partitions!

You might have noticed that the “-P” parameter does not accept a size parameter. This is because the un-encrypted container file is created as a ‘sparse’ file that starts at zero size and is allowed to grow dynamically to a maximum of 90% of the initial free space on the Linux partition of the USB stick.

PS: if you took the time to scroll all the way down, and if you would rather want to use the “iso2usb.sh” on your non-Slackware distro instead of going through all the hassle of this guide, please give me feedback about the errors and issues you find when running the script in your distro.
I absolutely wish that the script works perfectly on any distro, not just Slackware. If you have suggestions or patches, those are very welcome!