The Document Foundation announced version 5.0.2 of their free Office Suite a few days ago. LibreOffice 5.0.2 is the second update to the “5” major release. Again this is a bugfix release for Linux, no new functionality has been added. According to the Document Foundation “LibreOffice 5.0.2 is targeted to technology enthusiasts, early adopters and power users. For more conservative users, and for enterprise deployments, TDF suggests the “still” version: LibreOffice 4.4.5“. 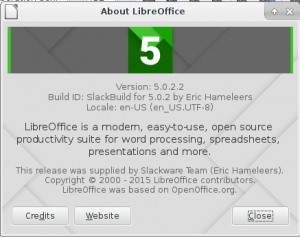 I decided to stick with gstreamer-1.x, to see if the new release is still affected. Let me know! If the bug still shows, I will compile LO 5.0.3 against gstreamer-0.x again.

Also, I released packages for the latest version of Calibre. I quit following the weekly Calibre update cycle, and at some point noticed that the Calibre developer himself also switched from weekly updates to bi-weeklies.

Calibre 2.x uses Qt5 for its GUI so you’ll have to install a couple of dependencies as well: qt5 of course, and podofo. The remainder of the dependencies (several python libraries) has been built into the package so that they do not have to be installed separately. Available for both Slackware 14.1 and Slackware-current, you can grab the calibre package off  the Slackware server or any other mirror that carries my repository: