Here is a new program for inclusion into my DAW package collection. It is Sonic-Pi, a ‘code-based music creation and performance tool’ as its web site states. My DAW collection already features Supercollider, which at its core is a powerful audio synthesis engine, but it also features a graphical user interface which you can use for live-coding music. Sonic-Pi has similar capabilities but it is more intuitively accessible (compare it to vi and notepad for instance).
Therefore Sonic-Pi would be better suited for introducing people to the concept of creating music through writing code, and letting that music evolve during a live performance by updating on-the-fly the code which represents the audio synthesis.

Sam Aaron is the creator of Sonic-Pi and uses it as a musical instrument in its own right with his band. He did a TEDx talk about programming as performance a couple of years ago:

He explains how Sonic-Pi was conceived as an educational tool. By making a free and open-source program like Sonic-Pi available to schools (and it runs on the Raspberry Pi – now you know where the program got its name from), you will gently introduce young kids to the art of computer programming while at the same time infusing them with a love for music – because they will be able to create the music they like in no time.

Sonic-Pi uses the synthesis engine of Supercollider, which means that that has to be installed as well. Both Sonic-Pi and Supercollider use JACK to route the audio and let it come out of your speakers.
The graphical user interface allows easy access to a large collection of example code snippets, sound samples and synthesizer definitions, so you will be listening to music in a few seconds after starting the program – after which you can begin modifying that code and hear live what your programming does to the generated music. The GUI also contains a nice visualization of the music you are generating. 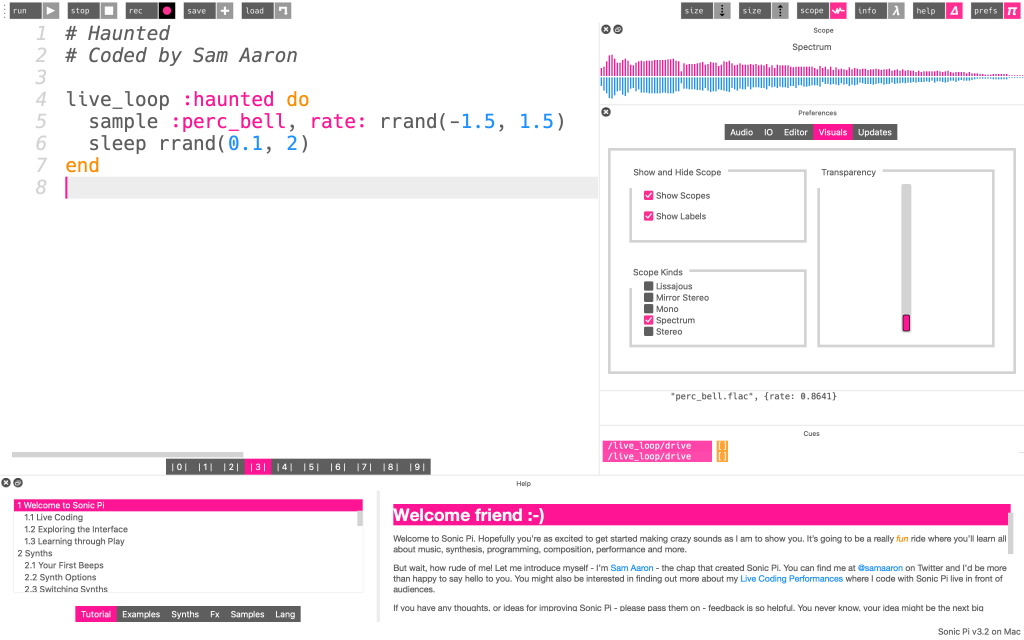 The software is usually distributed as an ‘appimage’ which simply bundles everything you need into an archive. This is not really Slackware-like, so I wrote a SlackBuild script which brings some order into the directory structure, removing a lot of redundant megabytes and creating a proper package with a nice menu item.

The liveslak scripts have been updated as well so that the next Slackware DAW Live will include Sonic-Pi.
If you use slackpkg you can download an updated template here: http://www.slackware.com/~alien/tools/templates/daw.template and use “slackpkg install-template daw” to have easy access to the full list of packages.

One thought on “Sonic-Pi: live-coding music software now on Slackware”