Sam Aaron worked long and hard towards a new major release of his Sonic Pi software, and kept us informed about his coding journey on Twitter. Eventually a 4.0.0 version saw the light of day, 17 months after the  final 3.x  version (3.3.1) came out. Sam writes really informative release notes, I encourage you to check them out on his release page. Lots of enhancements and fixes to be enjoyed.

You don’t know what I am talking about?

You’ve probably missed my last year’s blog post then.
Sam Aaron is a musician and a programmer, holding a PhD in Computer Science. He develops a really cool program called Sonic Pi, meant to educate people in making music and learning how to code at the same time.
Sonic Pi uses the engine of Supercollider, which is another live coding platform. But Sonic Pi makes the art of live coding – performing on stage or just having a blast creating music on your computer – very low-threshold. Out of the box, when you start the program, its GUI will show complete and working coding examples, a tutorial, and an intuitive interface to start producing music straight away: 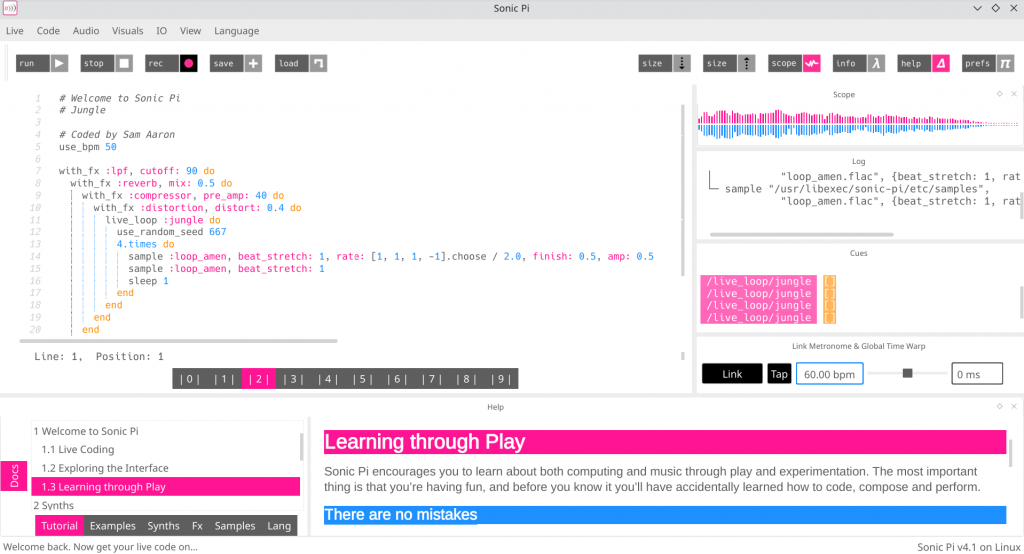 I have created packages for sonic-pi 4.1.0, the latest release, and I guess I am the first to create 32bit packages for a Linux platform, since I had to teach the “vcpkg” program that 32bit Linux is actually a thing. You could have guessed it… vcpkg is a cross-platform library manager created by Microsoft (!!!) which Sonic Pi uses to compile the libraries it needs.
I’ll see if I can create a patch for 32bit Linux support and send it to them.

Anyway, a month ago Sam Aaron gave a lecture at Lambda Days 2022 in Poland, about Sonic Pi, and here is a link to a recording of that lecture. You’ll learn more by watching that video, than by reading my blog posts about it.

The new packages (for Slackware 15.0 and -current) can be downloaded from all the usual places, for instance my slackware.com primary site, or the fast NL, UK or US mirrors.

I hope you are going to give Sonic Pi a try and that I’ll hear from you in the comments section below if you came up with a cool piece of audio.

And because Sonic Pi is contained in my Slackware Live DAW edition, I have also generated a new ISO for the Digital Audio Workstation. Get the “slackware64-live-daw-current.iso” ISO file, and copy it to a Ventoy USB stick or use the “iso2usb.sh” script to create a persistent USB stick.
This live environment should allow you to run Sonic Pi out of the box even if you have no idea how to configure the JACK audio server.

5 thoughts on “Sonic Pi 4.1.0 packaged for Slackware – and for live coding musicians”