I have not been updating this blog for a couple of days, but that did not mean I was sitting on hy hands.

These are the package updates which landed in my various repositories during the last few days:

Nearly every week I have been updating my Calibre packages whenever Kovid Goyal released a new version. Especially the last couple of releases are really exciting. Perhaps you noticed (if you are an ebook lover or even an ebook writer) that the Sigil EPUB editor’s progress had stalled, in fact the software’s development is dead. I did not really care because Sigil had switched its Qt dependency from 4 to 5 and Slackware does not contain Qt5, so new Slackware packages were out of the question anyway. Now, Calibre has been enhanced with an ebook editor. Visually and functionally the Calibre ebook editor application shows similarities to Sigil, however it is a completely different program, and it integrates perfectly into the Calibre GUI. You can invoke it directly by running “ebook-edit” from a terminal or using the “Edit E-book” menu item in your Desktop Environment.

Calibre can also run as a Web Server with an OPDS interface, ideal for when you have an ebook reader with a Wireless network interface – you can download books directly from your library without the need for a USB cable. But it needs to be hidden behind an Apache reverse proxy to make it safe enough to use on the Internet. I recently installed COPS however, which is built from the ground up to be a replacement Calibre OPDS PHP Server. After some discussion with the developer, I talked him into adding an online web-based EPUB reader which is based on Monocle, so that I can read my ebooks directly on my ChromeBook without the need for downloads or browser plugins.

I already posted about my gripes with building the new LibreOffice 4.2.0. Well, I finally managed to make it work, and the resulting packages (for Slackware 14.1 and -current) are available. A significant bug was rapidly discovered in Calc when using a non-english language pack. It seems that other people suffered from this in earlier releases even, and not just on Slackware. Still, this is a release with many improvements. Read more about the new features and fixes on the announcement page. Interesting tidbit: LibreOffice 4.2 offers a new Start screen, with a cleaner layout that makes better use of the available space – even on small screens – and shows a preview of the last documents you opened.

Focus for the 4.2 cycle is performance and interoperability (yeah, when is it not) with MS Office.

Note that I ship my LibreOffice 4.1 and 4.2 packages with additional “libreoffice-dict-<language>” packages, containing dictionary and spellchecker support! If you are still running Slackware 13.37 there’s LibreOffice 3.6.7 for which I also have packages, and users of Slackware 14.0 are served well with LibreOffice 4.1.4.

Another update to Chrome/Chromium brings this open source version of Chrome to 32.0.1700.107, and interestingly enough (but I disregarded this) another update appeared one day later which “upgrades” Chromium to 32.0.1700.103. A comment to that blog announcement questions the effective downgrade but there is no answer yet from the developers.

The SlackBuild was modified a bit (thanks dugan!), in order to solve several bugs in the interaction with vBulletin, which is the software powering LinuxQuestions.org (hoster of the main Slackware user forum on the Internet).

I have packages ready for the new chromium:

The VideoLAN team released version 2.1.3 of their VLC player yesterday.

This is another maintenance release of the “Rincewind” release, “fixing numerous bugs, and improves decoders, notably for the new formats (HEVC and VP9). Important fixes involve Audio and Video output management on most platforms“. 2.1.3 also “improves the demuxer and decoders for most formats, and the various interfaces“.

Where to find the new VLC packages:

Rsync acccess is offered by the mirror server: rsync://taper.alienbase.nl/mirrors/people/alien/restricted_slackbuilds/vlc/ .

My usual warning about patents: versions that can not only DEcode but also ENcode mp3 and aac audio can be found in my alternative repository where I keep the packages containing code that might violate stupid US software patents.

There was a minor version number update today, for Adobe’s Flash Player Plugin for web browsers. The update is accompanied by a security bulletin “apsb14-04”

Packages for Mozilla compatible browsers are here (and the update to pepperflash plugin for Chromium should follow shortly):

A new release of the web browser plugin for OpenJDK is available since today. Version 1.4.2 finally makes Oracle’s Java version tester page work again (remember that you now have to explicitly allow the plugin to start inside your Firefox or Chromium browser):

Get the packages at http://slackware.com/~alien/slackbuilds/icedtea-web/

The latest  KDE Sofware Compilation is 4.12.2 which is available now and it accompanied by Plasma Workspaces 4.11.6. Mostly bug fix release, you should have no issues upgrading.

Contrary to what I had told before, I have built these packages on Slackware 14.1. I am running them on all my Slackware-current boxes without issues. The difference between Slackware 14.1 and -current is not so big yet, which is the rationale behind my decision to use Slackware 14.1 as the compilation platform this one time (for maximum compatibility). You will find all the installation/upgrade instructions that you need in the accompanying README file. That README also contains basic information for KDE recompilation using the provided SlackBuild script.

You are strongly advised to read and follow these installation/upgrade instructions!

My packages can be found in the ‘ktown’ repository which I maintain for KDE packages:

This concludes the week in review. I just finished baking a fresh loaf of bread and the smell makes me mad. Have to wait until the morning (it’s still hot and the time is just past midnight). 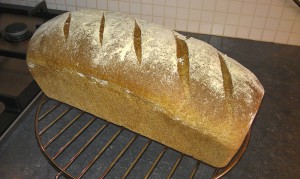 Remember:
You can subscribe to the repository’s RSS feed (RSS for ktown and RSS for multilib available too) if you want to be the first to know when new packages are uploaded.

10 thoughts on “The week in review”