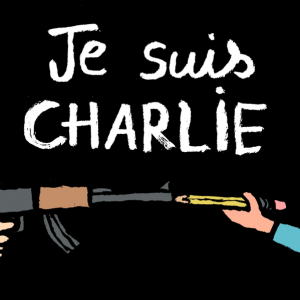 Bear with me – I need to make this statement.

The terror attack on a  french satirical magazine, killing 10 of its cartoonists and journalists, is an attack on Freedom of Speech. Only morons are afraid of words and images. Who in his right mind kills journalists unless he is afraid of the truth?

Wars are fought to gain power, for money, for religion. But religious wars are also just a fight for power. The Crusaders in the Western past, and the Jihadists in the Eastern present, there is no difference. Totally convinced of their own beliefs, the beliefs of other people must be repressed at any cost. What else is this but madness?

Terror goes beyond war. Warring factions are both defending their beliefs, however twisted their beliefs are. Terror on the other hand is waged on innocent people. It is meant to put fear in the hearts of the citizen with a long-term goal of establishing some form or repressive regime – even in democratic countries, repression can be achieved. People can be herded like sheep if you keep the truth from them. In Western (Christian) civilization, it was the period of Enlightenment that rid us of the repression of religion. In some islamic countries, this step still needs to be made. The Crusaders are no more (despite the statements of islamic fanatics) – and now Muslims need to raise their voice and fight these people who justify their actions by calling upon Allah but are in fact without faith. Terror does not need a God.

What is the best weapon against terror and false beliefs? The truth! You can live in freedom only if you have access to the truth, and are able to fight falsehoods with proof to the contrary. Do not let yourself be scared away by terror. The terrorist has already lost if you stand up for your freedom and for the truth.

27 thoughts on “Terror does not kill freedom”