A new release of IcedTea  is available. Version 2.6.1 came right after last week’s 2.6.0 which paved the way for OpenJDK 7 “Update 85 Build 01” (resulting in a Slackware package openjdk-7u85_b01). This latest version of icedtea encompasses the July 2015 security updates for Java7. The release announcement can be found on the blog of release maintainer Andrew Hughes.

The upcoming release of icedtea 3.0.0 will move us to OpenJDK 8, but for now it is Java 7 you’ll still be using if you install my packages. A bit of patience is required.

A list of  CVE’s is associated with the new release. Here are all security fixes mentioned in the post:

Remember that I release packages for the JRE (runtime) and the JDK (development kit) simultaneously, but you only need to install one of the two. The JRE is sufficient if you only want to run Java programs (including Java web plugins). Only in case where you’d want to develop Java programs and need a Java compiler, you are in need of the JDK package. Get them here.

The Java package (openjre as well as openjdk) has one dependency: rhino provides JavaScript support for OpenJDK.

Optionally: If you want to use Java in a web browser (which supports NPAPI plugins – this excludes Chrome & Chromium but you’ll be OK with all Mozilla [-compatible] browsers) then you’ll have to install my icedtea-web package too. While Oracle’s JDK contains a browser plugin, that one is closed-source and therefore Icedtea offers an open source variant which does a decent job.

If you want to test your browser plugin, check out the Java Tester page, or Oracle’s own verification page which of course urges you to upgrade to its own Java 8 instead: 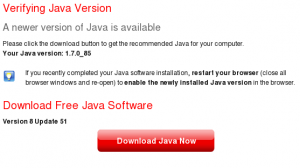 If you want to compile this OpenJDK package yourself, you need to install apache-ant additionally. Note that the previous requirements of xalan & xerces packages have been dropped; ant will provide all required build functionality on its own now.