Mozilla upgraded its Firefox browser to version 5.0. Slackware followed by packaging it for Slackware -current and offering it as a patch (it fixes some security holes) to the old 4.0.1 version in Slackware 13.37.

Infected by Google Chrome’s release strategy, it seems like the Mozilla developers now think that jumping to new version numbers fast, while abandoning their older release, is a good thing to do. Their rationale, “the web is changing fast and our software should keep the same pace” sounds valid, but I predict that it will negatively affect their usage statistics.

Read this blog entry which voices concern over the deployment of Firefox in enterprise environments and especially Mozilla’s director for the Firefox browser (Asa Dotzler)’s comment… I do not think he did the right thing by downplaying the corporate environment in which most of us have to spend 40 hours every week.

I work in two different “corporate environments”: one is that of my employer (IBM) where we have standardized on Firefox but internal IT keeps tight control over versioning and features… I guess IBM can do that. And then I face the IT landscape of my customer where Internet Explorer is king and open source / open standards adepts are fighting an uphill battle in getting Firefox accepted as a viable alternative.

Leaving alone all the enterprise stuff for a bit, what consequences has this new Mozilla strategy for you and me, Slackware users? Well hum.

It became obvious very soon after running slackpkg and upgrading to the latest slackware-current… I started Firefox and was greeted with the message that my Google Toolbar extension would be disabled because supposedly it is not compatible with Firefox 5.0: 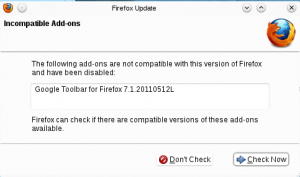 I know, some of you consider that toolbar a piece of legalized spyware, but it keeps my search history available to me and not just Google (what do you think happens with all the search queries you enter in a Google search?) and I like it. So… I wanted it back ASAP.

It is most unfortunate that Google no longer considers the Toolbar as the ultimate weapon to get their Google services onto everybody’s desktop; now they have their own browser, Chrome, and that gets all the attention. This means that updating the Toolbar to the latest Firefox requirements does not have a lot of priority.

There is a way around it, which does not involve waiting for Google, and does not require any other software to be installed. Adding one configuration setting is all:

If you open your add-on configuration Window now (“Extra > Add-ons“), you will see that the compatibility check has been disabled for Firefox 5.0! And you will also see that the Google Toolbar (and possibly other so-called incompatible add-ons) are enabled again – at your own risk of course:

I hope this helps some of you.

6 thoughts on “Google toolbar in Firefox 5”