Time for a new post about baking, a detour from the incessant talk about Slackware Linux and Open Source Software.

Today’s topic is “brabantse worstenbroodjes” aka dutch sausage rolls. I wrote about these worstenbroodjes on Google+ (in the Art of Baking community of G+) after I had baked a first batch early last year. Recently I revisited and revised the recipe when I made a new batch to “celebrate” my last day as an IBM employee. My colleagues loved them.
The most important revision is my spice mix, which is more complex than the simple initial attempt, which contained way too much salt. I also opted for pure beef instead of a pork/beef mix. These worstenbroodjes are halal / kosher.

In March 2016, the brabantse worstenbroodjes were added by Unesco to the natoinal list of “immaterieel cultureel erfgoed”. In english this is called the Intangible Cultural Heritage List. That sounds big, but actually it is simply a new way to preserve old traditions for future generations. In this case, a tradition originating in the southern region of the Netherlands: Noord-Brabant is a province of the Netherlands. Sausage rolls were initially created as a means to conserve meat by rolling the meat into bread dough and cooking it. Traditionally the brabantse worstenbroodjes were consumed only at special events with a religious context: at the end of Carnival, late tuesday night as a means to compensate for all the alcohol (further south people would consume herring on rye bread instead); and when coming home from night mass on Christmas Eve. Essential part of the tradition is that worstenbroodjes are meant to be shared with friends and family as part of a get-together event. 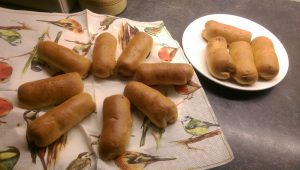 On to the recipe:

The brabantse worstenbroodjes are made from yeasted bread dough, which is wrapped around a sausage of beef & pork mincemeat spiced with salt, pepper, nutmeg, mustard (and other spices if you like, but the nutmeg is essential).

My recipe will create 30 worstenbroodjes consisting of 35 grams dough and 35 grams meat.

When you want to add some extra complexity to the flavor, you should try making these rolls with a dough that has been developing in the fridge for at least 48 hours.

This is an ideal snack which should be eaten straight out of the oven but still tastes great the next day when cold. You can freeze them after baking if you want. Heat them up again when it’s time to eat them, straight from the fteezer into a pre-heated oven during 12 minutes at 180 degrees centigrade.