I have just bought a Sitecom Multifunctional Print Server, the LN-308. Unfortunately, this printer comes with a MS-Windows based control center application, which you need in order to configure the printserver over the local network.

As a Slackware Linux user, this fact could not defeat me, and I tried my luck with Wine. I built a Slackware package for the latest Wine (1.1.34) and indeed, this application installs and works flawlessly in Wine (on Slackware64 with multilib to be precise).

This is when I found out that the default font rendering in Wine is not as good as when the program would run natively in Windows. To fix this, you need to enable sub-pixel font rendering (font smoothing) in Wine.

You need to make some changes to the “Windows registry” which is emulated by Wine. To start the included registry editor, you either double-click it from within the Wine File Explorer (start "winefile” in an X terminal, browse to the "C:\Windows" directory and doubleclick “regedit.exe") or run it directly from the X terminal prompt with “wine c:\windows\regedit.exe".

Make the following changes to the registry to enable sub-pixel font rendering:

Browse to [HKEY_CURRENT_USER\Control Panel\Desktop] and create/update the following “DWord” values (note: the DWord values are hexadecimal, which is the default for entering values in regedit.exe). You may have to create several of these, since by default only the “FontSmoothing” registry setting is present:

Then, restart your Wine applications and watch the difference in font rendering. The jagged edges should have disappeared. As an example, here are two screenshots from sections of winefile, before and after the registry hack. Click on the images to see the full version. Thedefault font used in winefile is quite small (6 point) but here it makes the changes in fort rendering even more obvious. 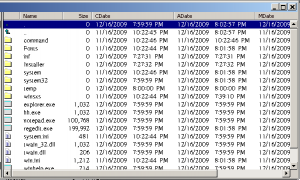 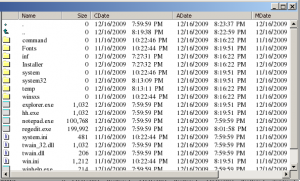