Not everybody follows the Google+ community “The art of bread”, so I will duplicate my post about a great bread I baked last week.

Last year during the christmas holiday, I started my bread baking hobby – basically everything created out of yeasted dough. In the beginning I used the regular “fast-action” yeast – commercial granulated yeast available in small sachets. But then I discovered the health benefits of “wild yeasts” and created several “sourdough starters” to experiment with those. It turns out that the breads I bake from my sourdough starters have so much more depth of flavour than the breads I bake with the fast-action commercial yeast… so that’s what we’ve been eating almost exclusively since spring season.

I felt it was time to create a rye sourdough starter this year’s christmas holiday period, to see how different the breads would be using this new starter compared to the wheat based starters I have used so far.
My first attempt to bake something with that new starter (a buckwheat and dried cherry sourdough bread) failed miserably because the dough collapsed just when I wanted to bake it (was it overproofed? Too much buckwheat?). I still baked the sticky mess in a dutch oven to keep it together somewhat… and the result was a very nicely tasting clump of very dense bread.The second attempt went a lot better: 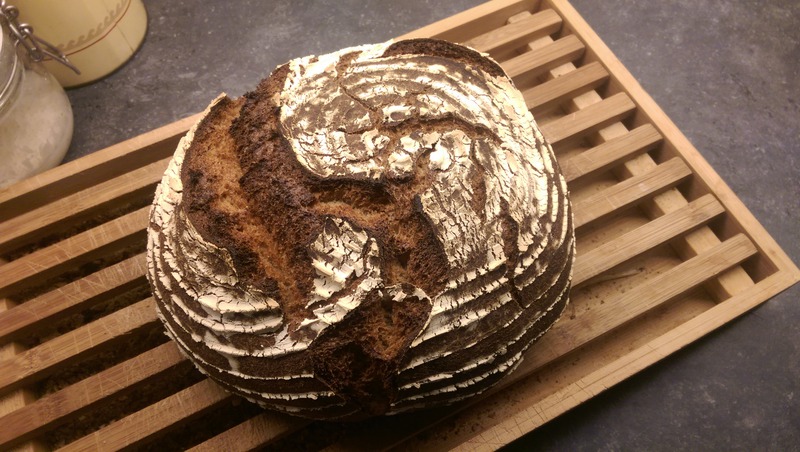 My wife gave me a book on sourdough by the Swedish baker/writer Martin Johansson. Using his recipe for Rye and Honey sourdough, I ended up with the big loaf in the picture. I never had a sourdough grow so much in volume during its bulk fermentation and proofing stages, it was amazing! This time, the dough kept its strength and structure and gave a perfect result. The added honey creates a beautiful dark and tasty crust, and the crumb is soft, with a delicious blend of the rye and acacia honey.
I never cared much for the rye bread we can buy in the shops here in the Netherlands, but I had been adding 10% rye to my whole-wheat sourdough breads lately and that really improved the flavor of my breads. I am glad I finally tried increasing the rye percentage.Here’s the recipe I followed (slightly adapted from the book).The night before you bake, create a levain – mix the following ingredients and leave them to develop overnight (covered under plastic wrap or a towel):

The next day (in my case, appr. 10 hours later), mix the following together and leave to autolyse for 30 minutes:

After the 30 minutes autolyse, mix into the dough:

Knead the dough by hand for 10 minutes, then leave it in a covered bowl for its bulk fermentation stage. The recipe estimates this to be 3 to 5 hours, but after 3 hours my dough had expanded to more than double the original volume so at that point I decided to continue with the recipe.

Dust a round proofing basket with flour (or use any kind of bowl lined with a tea towel and sprinkle the towel generously with flour), and place the dough in the basket with the seam down (the seam-side will be facing upward in the oven, thus creating opportunity for the bread to crack open while baking). Cover the basket (or place it inside a big plastic shopping bag) to prevent draught from messing with it and leave it alone in your kitchen for a further 1.5 hours of proofing.

In the meantime, place an oven stone or pizza stone roughly in the middle of your oven (if you have one of course… the srone adds heat mass which is beneficial for common household ovens), and a metal tray on the oven floor. Pre-heat the oven to 240 C,

When the dough has proofed sufficiently (and roughly doubled in volume again), turn over the basket onto a silicone mat or a sheet of baking parchment, and shove that onto the baking stone in the oven.
Pour a cup of cold water into the metal tray on the oven floor – that will produce steam and develop a great crust.

Bake for 20 minutes on 240 C with the steam, then lower the temp to 210 C, open the oven door slightly to let the steam escape, close the door again and bake for a further 20 minutes.

The smell! The flavor! One of my best.