Last weekend I prepared another diner which I had not cooked for a very long time.

I love rich oven dishes, and traditional greek “moussaka” is a long-time favourite of mine. I learnt how to cook it while I lived in a student home.

There are many variants of moussaka which do not honour the original method of preparation. Things like potatoes do not belong in moussaka.. while cinnamon, oregano and lots of vegetable oil do belong! I try to follow a more traditional approach. Any greek readers, please come up with improvements if your Mom had a different recipe! 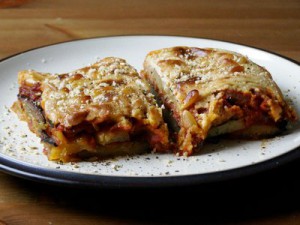 The result will be a heavenly smell in your kitchen while the dish is finishing in the oven. Your belly will be all warm and fuzzy after emptying your plate.

The prime ingredient in moussaka is the aubergine, or eggplant. This fruit (commonly mistaken for a vegetable!)  is one of the family of nightshades – like tomatoes, cayenne, and even tobacco. It’s easy to spot in the pic below that this is a fruit – it contains seeds. Like with tomatoes and potatoes, there is a certain bitterness in the eggplant which you can eliminate by “sweating”, steaming or grilling. I am going to grill the eggplant. 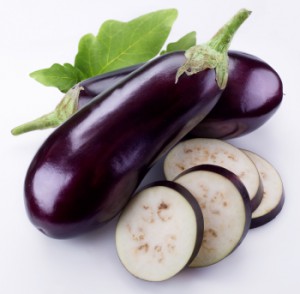 Another ingredient which deserves a separate mention, is the béchamel sauce. This sauce of butter, flour and milk is thought by many people to be difficult to make, but in fact it is dead easy, The béchamel, along with grated cheese, will create a beautiful soft-crunchy crust on top of the moussaka.

We continue with the final part:

Serve it with some greek white wine like retsina.

I could eat this every week… but it took years to find an opportunity cook it because my son dislikes the taste of the eggplant. He still did not like it much… but he ate it all anyway.