I cooked diner tonight and it was yummy… so I decided to write it down in the blog.

My son who was going to assist me in the kitchen asked to create “something with cheese” before I drove to the supermarket, so I complied and added cheese, but if you are going to cook this recipe, you will find that it works even better without the cheese.

This “spanish chicken with chorizo and potatoes” is a variation on a recipe originally published by Nigella Lawson in her book Kitchen and to which I added some of my own ideas. It will cost you a minimum of effort to prepare this meal, since most of your time will be spent sitting in front of the oven and watching the chicken crackle and pop.

The result tastes deliciously because the combination of the spicy chorizo and the orange peel does wonders. I used an oven-proof pyrex dish which makes for a nice presentation when you serve it at the diner table. 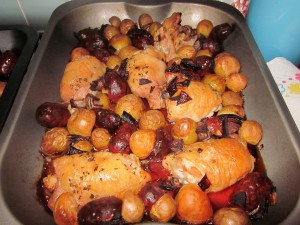 Don’t take the amounts too seriously… this dish can not fail you. If you want, just add more chorizo and onion, or try and leave the tomatoes out.

I served this with a green salad mixed with ground nuts, raspberries and spicy cheese (cut into small cubes) and a vinaigrette of raspberry-flavored balsamico (the salad was another idea from my son, which he executed while I was busy with the chicken).