When I started baking breads last Christmas holiday, it was mostly because I wanted to know if I could make three particular products: a foccaccia (to revive a memory from an amorous holiday trip with my girlfriend, now wife), a “limburgse kersenvlaai” (a cherry pie) and a “limburgse rijstevlaai” (a pie with rice & egg filling).

I made the foccaccia long ago (and like it a lot), the cherry pie a few weeks ago and last weekend I created the final one on my “bucket list”: the “rijstevlaai“. 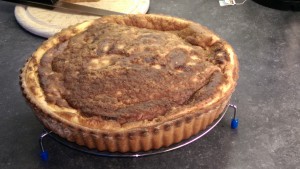 Both pies are made with enriched bread dough. In the old days (centuries ago) fruit pies were a way to preserve the produce of the land (grain, fruits, eggs, milk)  in the region where I was born: Limburg in the southern Netherlands. Rice pies were an influence of the Spaniards invading the southern part of the Netherlands and Belgium in the 80-year war.The rice pie is relatively complex to make because it needs the right mix of ingredients to produce a good filling:  the cooked rice must be exactly moist and sweet enough.I must say, the result is great! It’s just a shame that nobody in the family likes it… it’s a typical “Limburgian” treat and the “Hollenders” have a hard time appreciating the taste.

Here is the recipe for those who want to try and repeat it. I took it from an old recipe book (Vlaai en ander Limburgs gebak van Wil en Netty Engels – Geurts) and adapted it slightly (less egg, less sugar).

Preparation of the filling:

Preparation of the dough :

Don’t cut the pie until it is completely cold.

The rijstevlaai is baked in a tin like this one:

Note: I posted this earlier on Google+’s “the art of bread” community where it was not visible for everyone.