I have enjoyed the BBC’s Great Brithsh Bake Off series a lot. My wife has been watching these episodes longer than I have – she is the real cook – but I got increasingly interested because of the sympathetic presentation by Mary Berry and Paul Hollywood. Always amazing what these amateur bakers can come up with…way out of my league.

In the second series, which aired in 2011, Paul Hollywood set a technical challenge to the contesters: to make an Italian Focaccia bread. Ever since I went to Italy with my girl friend (now wife) and ate a real freshly baked focaccia bread, I have been spoiled by that event. I never got an appetite for the factory-baked ones you can buy in the local supermarket. I remember that the original bread tasted great because it was almost soaking with olive oil and was full of mediterranean flavours.

So I promised myself to bake a focaccia one day. However, I was discouraged by the fact that making a good focaccia dough seems to be quite difficult to make. Also, I wanted to use my hands, not a kneading robot to make the dough.

That is why I carefully watched the Brithsh Bake Off Masterclass session where Paul Hollywood showed how he makes his focaccia, and I used the recipe as outlined in his book “How to Bake“. I split the amounts in half because I wanted to end up with a single bread for a 2-3 persons side-dish.

2.5 hours for preparation, 30 minutes for baking. 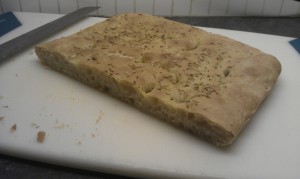 I almost ate all of it before thinking of taking a picture.

The result is a flat bread with a lovely crispy brown crust, and yet light on the inside. The focaccia has lots of air pockets or various sizes- the sign of a good bake. It tasted great! A real mediterranean treat.

The focaccia should be eaten right out of the oven, or while it is still warm, for the best experience.