Last time I updated my OpenJDK packages there was a ton of critical bugfixes which had been applied by the IcedTea community – fixes which Oracle had not yet added to its own version of Java. That version of OpenJDK called itself “Java7 Update 40 Build 31” aka openjdk-7u40_b31.

It took a while for Oracle to release its own 7u40 release – as you know Oracle uses OpenJDK as the base upon which it builds its binary releases of Java SE, but the company sometimes does not respond to critical holes as fast as the IcedTea developers do.

Last friday, the IcedTea team released version 2.4.2 of their “build harness”. This new icedtea release updates its OpenJDK support with a number of (non-critical) bug fixes. It also synchronizes the OpenJDK code with the upstream “Update 40 Build 60” tag. Hence, the new OpenJDK packages which I present to you today are versioned “7u40_b60”

You can check out the mailing list announcement for the new release, since there is not yet a blog post on Andrew Hughes‘ site. It will be there shortly, for sure. I will merely list the bugfixes here: 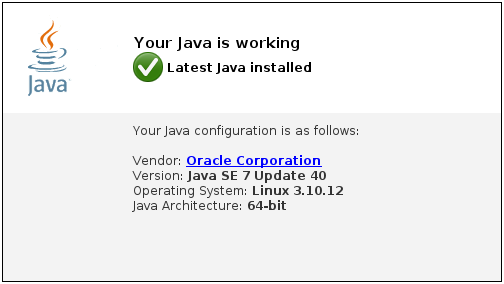 My packages for OpenJDK have been compiled on Slackware 13.37 and are useable on 13.37 as well as 14.0 and -current! (as the screenshot shows). Get them preferably from a mirror site (faster downloads):

Further packages that are recommended/required:

Note that you should only install one of the two packages, either openjdk or openjre, do not install both at the same time or things will break! The openjdk package contains the jre (java runtime) as well as the java development kit.