LibreOffice Community Edition 7.3.0 was released last week… on the day we were preparing the Slackware 15.0 release. You’ll forgive me that my focus was elsewhere and that it took until today to upload a new set of packages for Slackware 15.0 and -current.

The main selling point of the 7.3 release cycle is better interoperability with Microsoft’s Office file formats. Note that the Microsoft proprietary file formats are still based on a deprecated standard (since 2008 actually), whereas LibreOffice uses the ISO standard OpenDocument Format.
These improvements center on three areas (text copied partly from the release notes):

Furthermore, a lot of effort has gone into improving the first experiences of people who are migrating away from the Microsoft Office suite. The LibreOffice Help being the prime target since that is where new users look to understand the different ways of working with the LibreOffice applications. 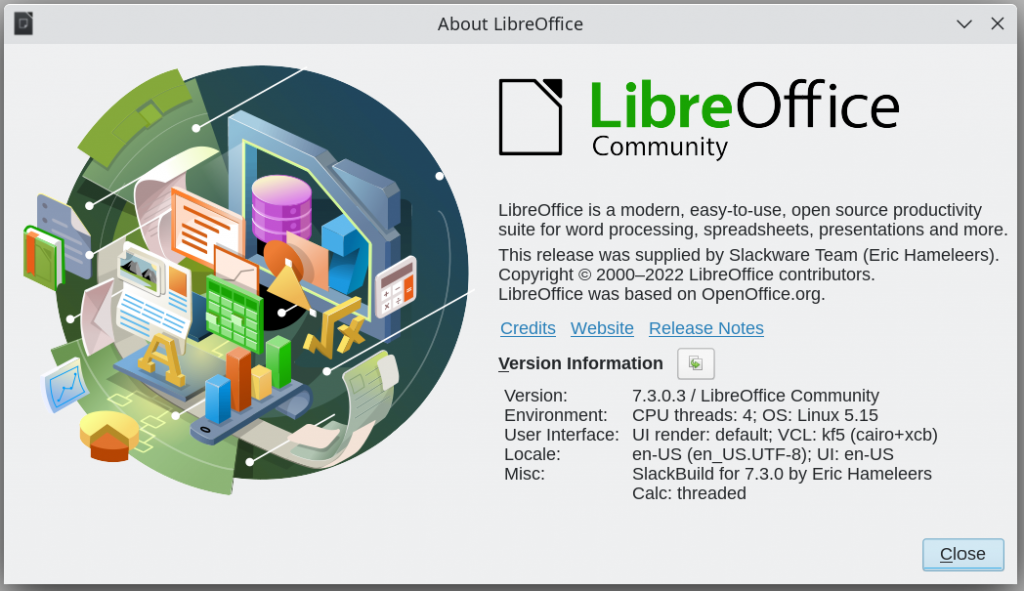 PS:
A reminder for people running slackware-current and using my packages but not reading my blog… you slacker! I hope some else points you to this page.
Sometimes Slackware updates its boost, icu4c and poppler packages and a lot of non-Slackware packages break as a result of required shared libraries gone missing.
For that reason, my repository also contains the packages ‘boost-compat‘, icu4c-compat‘ and ‘poppler-compat‘.
Note that this ‘compat‘ has nothing to do with my multilib ‘compat32‘ packages! The three ‘compat‘ packages contain older versions of the Slackware packages in -current for compatibility with binary packages that are broken until their maintainer recompiles them.
You can install ‘boost-compat’, icu4c-compat’ and ‘poppler-compat’ alongside their brethren, they do not conflict with or replace them.