In a previous post I mentioned that  LibreOffice 5.3 was released the first of February. At that time, I provided you with a LibreOffice 5.2.5 package instead, because I was rebuilding the 5.2 packages anyway and usually I need a bit of research time to make new releases compile.

And indeed… I hit a snag along the road which initially prevented me from compiling 5.3.0 packages, but a patch was shared by orbea on the blog which pointed the way to solving my issue with harfbuzz. For your information, the Slackware version of harfbuzz is not compiled with graphite support (because Slackware does not have a package for graphite) and the new LibreOffice requires this – so my libreoffice package has to compile an internal version of harfbuzz.

As said previously on the blog, the new LibreOffice 5.3 series introduces Collaborative editing which to me is the major highlight. A Docker image is available if you want to experience LibreOffice Online on your own private server.
Better text rendering is another highlight, hence the new requirements for harfbuzz (which is used as the rendering engine).
A detailed description of new features was made available as a web page:  http://www.libreoffice.org/discover/new-features/. 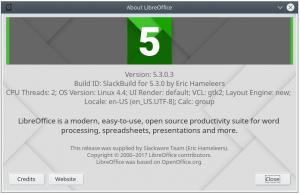 Get my fresh libreoffice packages for Slackware-current from a mirror like this one: http://bear.alienbase.nl/mirrors/people/alien/slackbuilds/libreoffice/.

Note: the LibreOffice browser plugin (NPAPI based) has been removed in LibreOffice 4.4.0:  https://skyfromme.wordpress.com/2014/09/25/killing-the-npapi-plugin/

I also added LibreOffice 5.3.0 to a re-spin of my PLASMA5 Live ISO which I uploaded last night, so if you want to play with the new features in a safe environment, try it on Slackware Live Edition. I will write more about the new PLASMA5 ISO in another post.

As a closing remark, I advise you to read the statement issued by the Document Foundation on the intentions of the Munich City Counsel to replace their version of Linux (LiMux) and LibreOffice with MS Windows 10 and MS Office by 2021. A sad example of how behind-the-scene lobbying of Microsoft and its partners is threatening to overturn one of the most well-known Open Source success stories in Western Europe.

13 thoughts on “LibreOffice 5.3.0 for slackware-current”