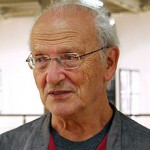 Jean Giraud, better known as Moebius, died yesterday at the age of 73, after he lost a long battle against cancer. Moebius developed a unique art style, known by many people although not everybody will realize this.

When I was a kid, I read his Blueberry comics in the weekly magazine I was subscribed to. When I grew up and my interest in graphic novels was renewed by the friends I made at university, I discovered the “adult” (as in: not kid-oriented) comics drawn by Moebius and was fascinated by the dark, yet vivid style of these drawings. The frames are explosions of colour – much different from the Blueberry style.

Not only did he create many comic strips (graphic novels would be a better description), he contributed story boards and conceptual artwork to several well-known movies like Alien, The Abyss and Tron. His Incal series was the inspiration for the movie The Fifth Element.

His drawing style can be characterized as “ligne claire” of which Hergé (the creator of Tintin) was another well-known exponent. However, the atmosphere of the stories these two artists created are near opposites.

I felt deep regret when I read that this great contemporary artist passed away. Let’s remember him through his works of art. 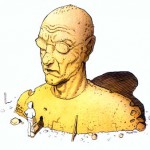