Not so very long after I was finally able to produce my first packages for Calibre 5.x, Kovid Goyal ended that development cycle and bumped his e-book management application’s major version number to “6” in order to make a switch from Qt5 to Qt6 as its graphical engine.

The main hurdle for me when the upgrade from Calibre 4.x to 5.x happened was that internally, Calibre switched from Python2 to Python3. Essentially the whole of Calibre is written in Python and it uses PyQt to build the graphical interface using Qt widgets.

It took me a lot of work to re-write the calibre.SlackBuild to also make that Python switch. After all, my single calibre package is actually getting built from many sources (44 tarballs for Calibre 4, 55 tarballs for Calibre 5) and a lot of those had to be replaced to work with Python3. Moving my calibre.SlackBuild to Python3 took so much effort that I decided to apply some simplification as well: I removed the script’s ability to build its own Qt5 libraries from source, instead I let my calibre-5.x packages depend on the qt5 package which is already present in the Slackware OS since release 15.0.
Naturally I was not looking forward to doing the same cumbersome and time-consuming exercise again, now having to figure out the intricacies of Qt6, a graphical toolkit I had never built or used before.

But I was bothered by the consequence that I had to stick with Calibre 5.44 being the final release using Qt5, and so I decided to take my time, and inbetween other activities I started gradually re-writing the calibre.SlackBuild script to encompass the new sources and get these compiled and tested.

Now then finally, you can install Calibre 6 on Slackware using a 170 MB large natively-built package which needs 64 source tarballs to compile You can get the new Calibre 6 packages from my repository or any mirror (like my own US mirror). No external dependencies, works out of the box on Slackware 15.0 or -current. 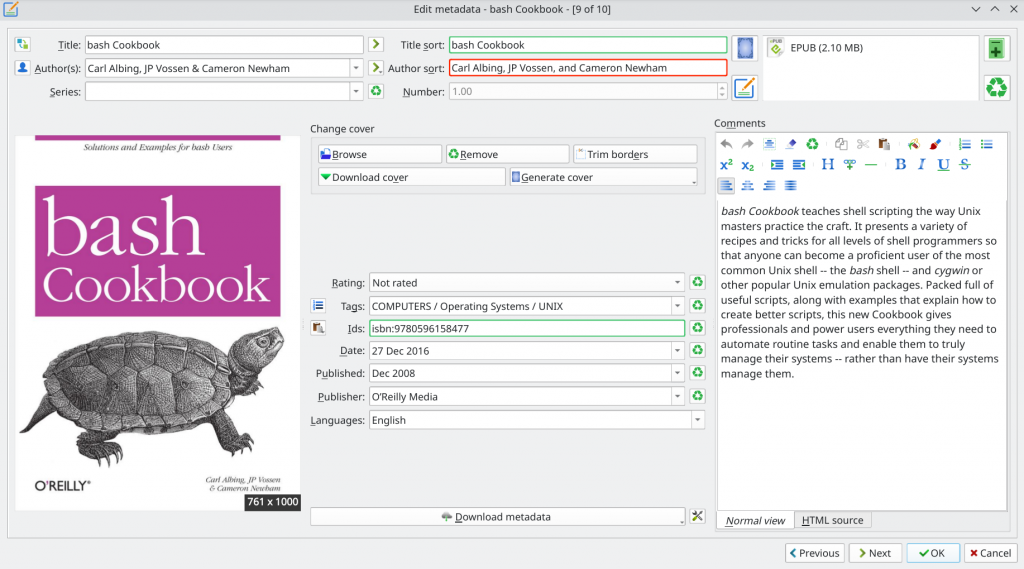 To refresh your memory in case you are still thinking “what the heck is he talking about” – Calibre is an e-book library management program which I started using after buying my first E-reader (a Sony TRS-T1) and discovering that the accompanying e-book management software was proprietary and not user-friendly. The functionality and ease-of-use of Calibre were so much better than the commercial software that I never looked back.
I now read my e-books on a Kobo Aura2 H2O . Adding books to the reader is dead-simple: Calibre exports my book library on the internet as a OPDS server that works with any e-reader that has Internet connectivity, and I can scroll through my library even when on vacation and pick a new book to read. The power of Open Source.

A note for those of you who are on a 32bit Slackware and are currently using my Calibre 5.x package. With Calibre 6 it is no longer needed to set the “QTWEBENGINE_CHROMIUM_FLAGS” variable to disable seccomp. Qt6 does not appear to have the issues that the embedded Chromium browser of Qt5 had.

I also checked that the application’s screenreader still works. Right-click the current page in your open e-book text and then click “Read Aloud“. The text-to-speech is provided by an embedded speech-dispatcher program.
This is great, but the downside of it is, that the default espeak voice sounds like Steve Hawking came to visit you. If you find out how to improve the text-to-speech capability of Calibre by adding voices (especially non-english) and playing with the various engines, please let me know in the comments section below. I really would like to improve the out-of-the-box TTS experience for people with visual disabilities or dyslexia.

24 thoughts on “First package for Calibre6 in my repository”