This recipe comes from an American collection of recipes published in 1918 and meant to provide people with ways to conserve precious resources such as wheat flour and sugar. Despite the economy of ingredients these rolls truly taste rich and wholesome, and are well worth trying.

Adapted to metric units and leaving out the lemon zest mentioned in the original recipe by Amelia Doddridge in: “Liberty Recipes”, 1918—USA which was digitized by Google and uploaded to archive.org.

Pour the scalded milk over the sugar and salt, mix well and set aside to cool. Once the milk mixture is lukewarm add 105 g of bread flour and the dissolved yeast. Mix vigorously and let the sponge ferment,covered, until doubled.

When the sponge is light add the melted butter, egg and corn flour. Mix well at low speed then add just enough bread flour to make a dough that is very soft but well developed and just slightly tacky.  Do not add too much flour or the rolls will turn out dry and heavy.

Lightly grease a bowl and place the dough to rise, covered, until doubled in bulk.

Gently transfer the risen dough onto a lightly greased surface and divide it in 12 equal pieces. Shape each into small round rolls (the dough is too soft to keep well any other shape more complex than rounds or ovals). Place each roll onto a rimless baking sheet and lightly brush with milk.

Let the rolls rise, covered, until doubled. Brush again with milk then with sharp kitchen scissors cut a decorative pattern on each roll.

Bake for about 20 minutes until nice and golden. 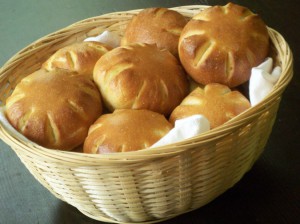 I found this recipe mentioned at http://bakinghistory.wordpress.com/2008/08/01/corn-flour-rolls-bbd-12-small-breads/

About ‘sponge’ or ‘poolish’:

A poolish, also called a ‘sponge’, consists of equal (by weight) parts flour and water, with a small amount of yeast added (100% flour, 100% water and 0.2 – 1% dry yeast). The high hydration level makes it look more like a batter than a dough. A poolish is made several hours (at least 2 hours, but 8 or more hours is even better) before creating the final dough by adding the remaining ingredients. Because of the high percentage of water in the poolish, you need to adapt the amount of fluids in the remaing ingredients because in the end, your dough needs to have an average hydration of 60-66% (meaning a ratio of 100% flour to 60 – 66% liquids).

Sponge is a “pre-ferment” using baker’s yeast and its function is similar to a sourdough starter (which contains wild yeast and bacteria). A pre-ferment allows more time for yeast and enzymes to convert the starch and proteins in the dough. This improves the keeping time of the baked bread. Also, the bread’s flavours will become more complex.

Why the scalded milk?

The whey protein in milk weakens the gluten in the bread. Gluten is what gives your bread its elasticity and helps keep the bread its shape. It also goves your bread a “chewy” texture as opposed to dry and crumbly (something you’ll also see when kneading dough for too long, because that too damages the built up gluten). When the gluten structure is broken down, it will prevent the dough from rising properly. Scalding the milk deactivates the whey protein so there is no adverse effect to the gluten.

The final proofing – when the rolls have been shaped and just before they are baked – ussually takes someting like 45 minutes at room temperature. However want them to be ready to bake when I get out of bed, so I decided to transfer the shaped bread rools to the fridge and let them ferment at 4° C overnight. The 8 hours at the slowed rate at which the yeast operates at that low temperature, should result in rolls that can be transfered to the oven straight out of the fridge in the morning. Ready for breakfast!

My remarks about the recipe:

I have never tried  a slow final rise in the frisge before – in fact, I never made these rolls before, so I will update the article tomorrow after I have baked and eaten the rolls.

There was another challenge: I do not have an electric mixer! When I formed the dough from the sponge and the additional ingredients, I ended up with a dough that was too sticky to manipulate with my hands. I added flour, but I wanted to avoid adding too much, so I decided on a “stretch and fold in the bowl” technique I have seen sometime ago in a video. What I did was use a plastic dough scraper to lift the dough up at one side of the bowl and then fold it inward, repeating this process for several minutes while rotating the bowl a bit after each stretch & fold. After a couple of minutes, the dough was a lot less sticky and nicely developed. Still too sticky to manipulate by hand, so I keft it in its bowl to rise, covered with shrink wrap.