Recently TrueCrypt has been in the news again, because of a couple of new critical security issues that were found for its Windows version. You can read more in these articles at Engadget, Threatpost and  Extremetech. Windows computers with TrueCrypt installed can be taken over completely by a non-privileged user, and the computer does not even have to have mounted any TrueCrypt container.

These recently uncovered flaws were not found in last year’s code audit of TrueCrypt sources. Apparently this omission is due to the complexity of Windows drivers and “the kind of vulnerabilities that exist in many software on Windows and they are caused by lack of proper parameter validation in kernel mode code” according to Mounir Idrassi (VeraCrypt developer) in Threatpost.

Despite the fact that these new vulnerabilities are not affecting Linux, it is highly unwise to keep using TrueCrypt on Linux. The code is no longer maintained, it already has security issues and good alternatives exist.

The aforementioned VeraCrypt is a fork of the TrueCrypt code which is actively maintained, and the recent flaws found (to be disclosed next week) in TrueCrypt have already been patched in VeraCrypt 1.15 last weekend.

VeraCrypt is a drop-in replacement for TrueCrypt if you let it handle your encrypted container in “truecrypt mode”: 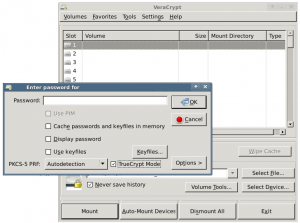 Users of slackpkg+ merely have to run “slackpkg update && slackpkg upgrade veracrypt“, assuming that the repository mirror you are using is up to date.

10 thoughts on “Update for VeraCrypt, new flaws in TrueCrypt”