Libreoffice 5.1.0 was announced last week on the Document Foundation blog.

The Document Foundation statement about this release: “LibreOffice 5.1 represents the bleeding edge in term of features for open source office suites, and as such is targeted at technology enthusiasts, early adopters and power users. For enterprise class deployments, TDF maintains the more mature 5.0.x branch (soon at 5.0.5)“.

Which is why I make this new 5.1.0 release available only on Slackware’s own bleeding edge: slackware-current. 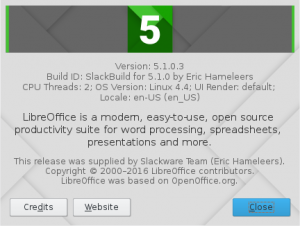 Some of the highlights of LibreOffice 5.1 as taken from the release notes:

Packages can be obtained from these mirror sites and probably others too (if you have a fast, uptodate and reliable mirror outside the US or UK I’d like to hear from you):

20 thoughts on “LibreOffice 5.1.0 for slackware-current”